Them Dukes! Them Dukes!: A Guide to TV's The Dukes of Hazzard (Paperback) 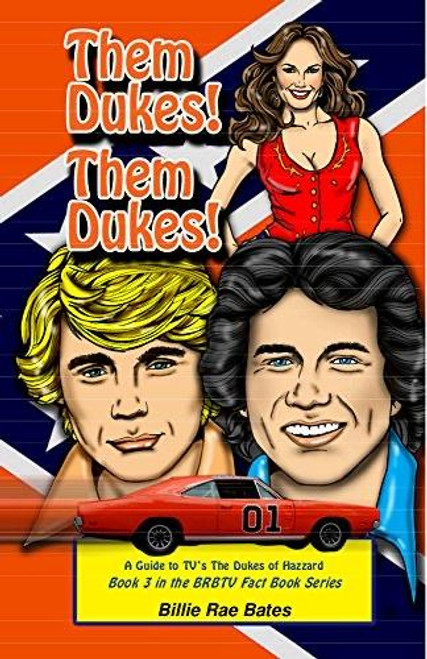 Them Dukes! Them Dukes!: A Guide to TV's The Dukes of Hazzard (Paperback)

What's the name of Boss Hogg's twin brother? In which two episodes did Audrey Landers appear? And just how many Duke cousins ARE there? The classic 1980s TV adventure show 'The Dukes of Hazzard' thrilled millions of fans over seven seasons on CBS. Now you can have all the fun 'Dukes' facts at your fingertips with this definitive reference guide, THEM DUKES! THEM DUKES! The second printed volume of the BRBTV reference guide series, THEM DUKES! THEM DUKES! is jam-packed with great features: comprehensive cast list, character guide showing how everybody relates, detailed episode guide, full credits to the show, a nicely illustrated guide to the merchandise associated with the show, official websites and birthdays of the show's stars, a photo tour of the original Georgia filming sites, and much more! The 2014 expanded edition adds more than 200 pages of content, including tons of photos from the many "Dukes" events over the years. BRBTV has been a solid source of information on classic 1980s TV shows since 1998. THEM DUKES! THEM DUKES is a must for any 'Dukes' fan.

A journalist of both print and broadcast, Billie Rae Bates' work has included a decade in the daily newspaper industry in Detroit; Saginaw, Mich.; and Wausau, Wis., as well as years of on-camera hosting and correspondent work for TV shows in Detroit and Washington, D.C. She indulges her love of classic television through the BRBTV series of fact books and reports, covering all aspects of greats such as "Dallas," "Dynasty" and "The Dukes of Hazzard" with interviews, episode guides and fun facts. Since 2006, BRB has kept up a news blog focusing on classic TV shows, and she's also blogged for Congoo.com and the OohLifestyle.com. She reviews books for Foreword Reviews, and she's the creator, writer and photographer of two yearlong photo essays, the much-discussed "My Mother's Clothing" and "The Inexplicable Lives of Dolls." She's written three novels, two of which are set in Detroit, and she's been known to do some acting, as well!

The Dukes of Hazzard: The Unofficial Companion (Paperback)

The Roads Back to Early Hazzard (Paperback)

The Dukes of Hazzard: The Unofficial Companion (Paperback)

A Moonrunner's Tale: From Grit to Gold, How "The Dukes" was Born (Paperback)

Best in Hollywood: The Good, the Bad, and the Beautiful (Hardback)