The Dukes of Hazzard: The Complete Fourth Season finds the redneck comedy down to a fine science almost comforting in its predictability. Cousins Bo (John Schneider) and Luke (Tom Wopat) still raise hell with the General Lee in rural Hazzard County (and still have no visible means of financial support). Daisy Duke (Catherine Bach) is still the picture of wildflower innocence despite her tomboyish temper and barely legal short-shorts. Uncle Jesse Duke (Denver Pyle) still basks in righteous anger at longtime enemy (and fellow former moonshiner) Jefferson Davis "Boss" Hogg (Sorrell Booke), the latter an unrepentant schemer for whom every living thing seems an obstacle in his quest for vast (and unethically acquired) wealth. As sure as the sun rises every day, any scene involving Boss Hogg and the idiotic Sheriff Roscoe P. Coltrane (James Best) will be played for maximum slapstick-cartoonish energy, all the better if dimwitted Deputy Cletus (Rick Hurst) becomes entangled in their shtick.

Season highlights include "Mrs. Daisy Hogg," with guest star Jonathan Frakes--destined to play Commander William T. Riker on Star Trek: The Next Generation (please note that Dukes' executive producer is one Paul R. Picard)--as a counterfeiter who falls for, and thus endangers, poor Daisy. "Double Dukes" finds Boss Hogg hiring two thugs to disguise themselves as Bo and Luke, but the real fun with this episode is a recent commentary track (optionally chosen via special features) with Wopat, Schneider, and Bach kidding around and reminiscing like naughty siblings. "Diamonds in the Rough," directed by James Best, concerns out-of-town gangsters searching for stolen diamonds stuffed in a Bugs Bunny toy that made its way from the Dukes' hands to Boss Hogg's Cadillac to Roscoe's hound. "Ten Million Dollar Sheriff" is a two-parter in which Roscoe inherits a load of money, and--for a time--becomes a kingpin even more dangerous than Boss Hogg. Comedian Jeff Altman makes a comeback as master-of-disguise villain Hughie Hogg, who implements grand plans to eliminate the Dukes and salt-of-the-earth tow truck driver Cooter Davenport (Ben Jones). Sprinkled throughout the season are musical performances by Buck Owens, Mickey Gilley, and other country artists. --Tom Keogh 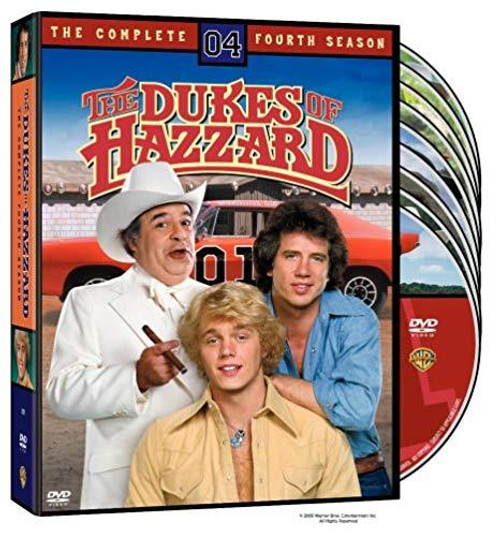